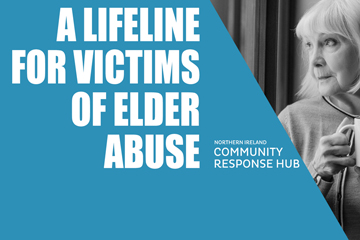 With the abuse of older people rising from already unacceptable levels during the recent lockdowns – Northern Ireland’s only dedicated safer ageing and elder abuse charity is announcing a new Community Response Hub to work with victims and their families.

Hourglass NI’s Hub, based in Newry, will be Northern Ireland’s only elder abuse-focused service and will act as lifeline for victims, their families, practitioners and partner charities who support older people. It will be Hourglass’s second hub after launching in Fife, Scotland, last summer.

The team will provide advice, undertake casework, instigate pop-up clinics across the country and work hand-in-hand with other agencies to raise the profile of the abuse of older people and safer ageing. The service will complement the existing Helpline available on 0808 8088 141.

1 in 5 UK residents (22 percent) have personal experience of abuse as an older person or know someone who has been abused - with almost 2.7 million victims thought to be affected across the UK*. Recent research conducted by the charity in Northern Ireland found that over half (55 percent) of those surveyed believe that the abuse and neglect of older people has increased as a result of the pandemic restrictions.**

The charity’s new community response model allows for more impactful interventions against the abuse of older people. However, attitudes regarding what ‘counts’ as abuse are thought to be fuelling the crisis. Hourglass polling** revealed that nearly a quarter (23 percent) of NI residents don’t believe that ‘acts of domestic violence directed towards an older person’ count as abuse. 2 in 5 of all those surveyed in NI reported that ‘not attending to an older person’s needs in a timely fashion’ doesn’t constitute abuse (41 percent), while 1 in 3 believe that inappropriate sexual acts directed at older people is not abusive.

Hourglass CEO Richard Robinson says: “Abuse of older people is a very real issue all over the country, and sadly Northern Ireland is no exception. Our community-based work will allow us to create an end-to-end model that is desperately needed - from prevention and early intervention, right through to recovery and moving on from abuse.

“Everybody should be able to grow older safely and away from abuse and neglect. We want everyone in Northern Ireland to be able to recognise abuse and feel confident in how to help their loved ones or people in their care to have access to the resources and support they need.”

Geoff, from Northern Ireland, was thankful to have support from Hourglass when his mother was a victim of financial abuse by another relative. You can watch his story below

The community hub is a secure respite for anyone who is anxious about the safety or welfare of an older person or themselves. Specialist teams are in place to support local communities in understanding the different forms of abuse and what to do if you or someone you know or care about has been a victim.

As well as the hub itself, Hourglass community response services can be accessed via the helpline, SMS, chat bot and instant messaging.

As part of the Community Hub roll out, Hourglass will be seeking volunteers to train and join their team, whilst also building strategic partnerships throughout Northern Ireland to support and fund projects that will benefit the community, end abuse and promote safer ageing.

*The ‘Growing old in the UK’ survey of 2,494 people - commissioned by Hourglass - explores attitudes towards abuse and neglect of older people across England, Scotland, Wales and Northern Ireland. The full report will be released later this year. Data relating to attitudes towards domestic violence and neglect is available on request.

The polling was conducted by Rockpool Research Associates on behalf of Hourglass, and was carried out in line with the Market Research Society (MRS) Code of Conduct.

** In June 2020, Hourglass commissioned an update to the existing survey – Growing Old under Lockdown 2020. Overall, 2,505 people took part in the follow-up survey across England, Wales, Scotland and Northern Ireland

Hourglass is a UK-wide charity with a presence in all four nations. It aims to protect and prevent the abuse of vulnerable older people by raising awareness of issues, encouraging education and giving information and support to those in need. It has the only national freephone helpline dedicated to this cause, open Monday to Friday between the hours of 9.00am and 5.00pm on 080 8808 8141 for confidential support and information.